I saw my doctor today. They are describing the mass they found in my right breast as large and suspicious. I have my biopsy on Friday.

We have good meat on the Big Green Egg. I am looking forward to it. I have my appetite back a bit.

It’s a really busy week for me medically speaking. We go to the doctor tomorrow. I should get some help for my low thyroid function and I am going to talk to her about maybe reducing my imuran dose so that I can have higher hemoglobin. I will also get the rest of the results from my breast imaging last Friday. I still don’t know what is causing the inflammation in my skin. On Wednesday, I have a consultation with a surgeon about my hand another issue. Friday is the biopsy.

My work commitment will drop from 21 hours a week to 6 or so. I am looking forward to this reduction. I am not sure how long this will go for but I will do admin for at least May.

In other news, the girls are recovering well. Grace is acting like not much happened. Piper has been a little bit behind Grace but today she ate like a horse. Her pain meds have been injectable as Piper does not take pills well and she had surgery on her face. We didn’t want to risk injuring her trying to get a pill in her. She has her last dose of her injectable drugs tonight.

I am really tired today. The stress from the mammography yesterday and knowing I have to have a biopsy next week is stressing me out. 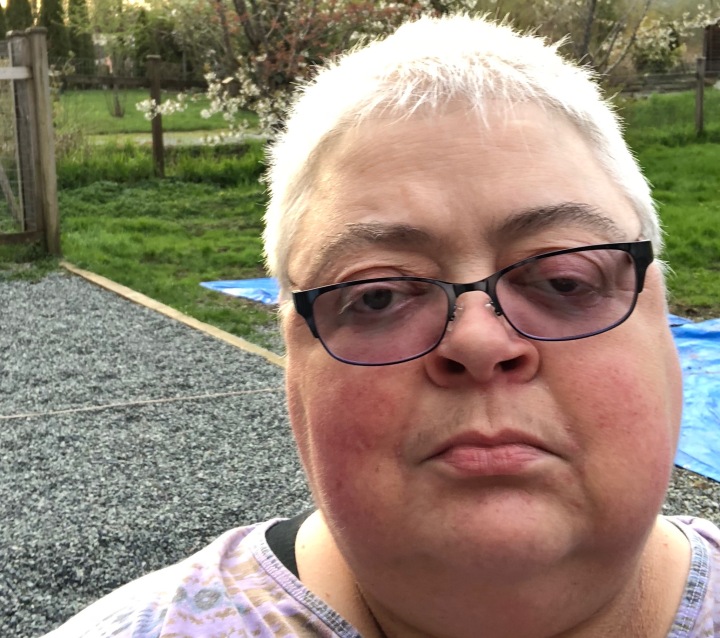 The girls are doing well. They have really good pain medication so that helps.

I had some breast imaging done today because of some thickening of the skin on my right breast. They found something that they can’t get a good look at so I need to have a needle biopsy next Friday. Apparently, it’s not too bad. Here’s what I have learned so far about our health care system and breast issues:

I see my family doctor on Monday. So, if there are other results I will get those then. 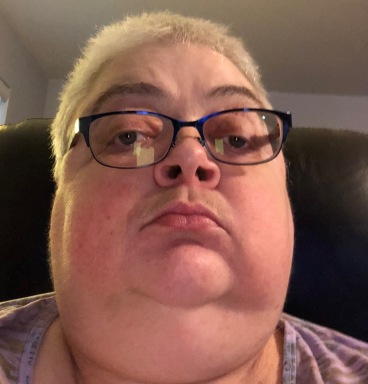 Well today has been a busy one at The Swamp. Piper and Grace both had surgery today. Grace had to have an eye removed. She had glaucoma which is very painful and not curable. It can be managed in the short term with drops. We will now have 2 one-eyed dogs!

Piper basically needed a facelift. She had too much skin on her face and it was pressing on her eye. She is having a bit more trouble coming out of the anesthetic than Grace but she’s doing ok.

I am still trying to recover from my cold. Blah. 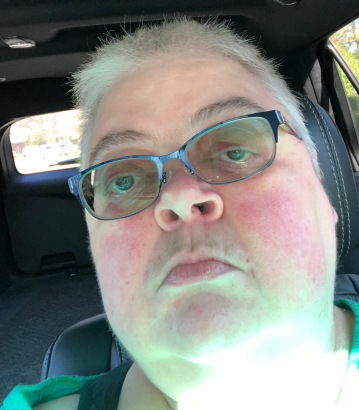 I am still trying to recover from this annoying spring cold. It’s been making my days a little difficult. So, here is today’s uninspired selfie: 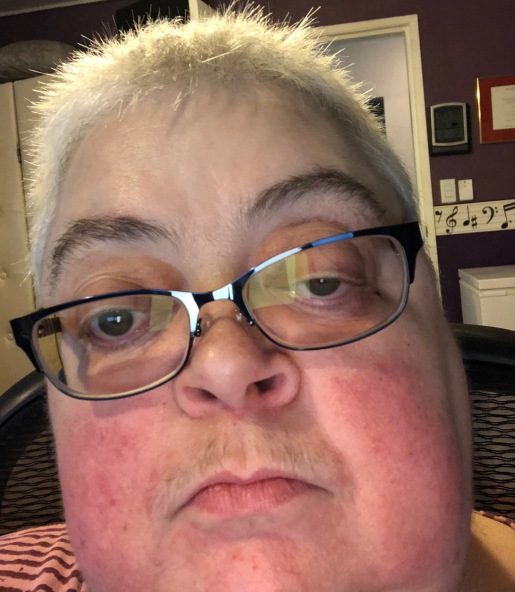 I am so sick today. I managed a couple of hours of work but now I am paying for it. Here are my new yellow glasses for night driving. I can’t wait to try them out! Although, I like them so much I might wear them more regularly. 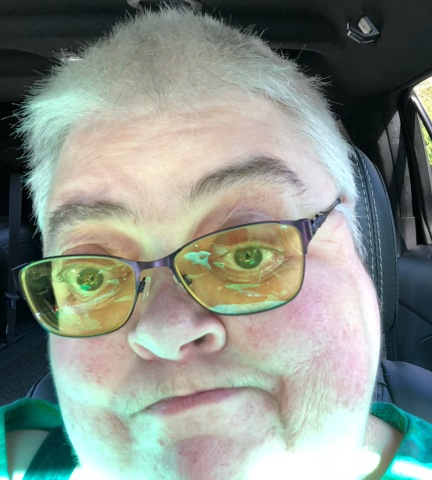 You know, terrorism, while horrible and unconscionable, is at least a bit comprehensible. If the reports about the Toronto mass murder are true, that he is a so-called “incel” or “involuntary celibate” is disgusting. The belief that one is entitled to sex and that they have the right to commit mass murder because women don’t find them attractive to have sex with is beyond the scope of my understanding. What is wrong with these men? They are actually ‘happy’ that one of their own is getting so much media attention. Our world is getting so very, very scary.

It is exactly this brand of toxic masculinity that feminism seeks to dismantle. The patriarchy – which has told these men that they are entitled to have as much sex as they want with beautiful women. When these men then try to ‘pick up’ women and are rebuffed they get angry. Instead of looking at themselves and their own behaviour they lash out and blame women. Yes, that’s right, it’s the fault of an entire gender why you can’t get laid. Maybe we have a secret society where we collectively decide that some dickwad is going to be on the ‘do not bed’ list.

Seriously folks. If there was ever time we needed feminism it’s right fucking now. Men are killing lots of people because they can’t find someone who will have sex with them. We need to rid ourselves of toxic masculinity that promises men a ‘woman in every bed’ much like families were promised a ‘chicken in every pot’ after the war. Here’s news for these so called ‘involuntary celibates’ you are entitled to nothing. If you want a girlfriend how’s about ditching your beliefs that you are entitled to one and seek to be a worthy partner.

I am angry and disgusted.

Today has been a good day. I got my blood work done finally. It’s been a rough several months evidenced by the fact that it’s been almost a year since I went for blood work that I am supposed to get monthly. I actually went up there a couple of times but they were so busy there wasn’t even anywhere to sit. The last time I went, there was no one there but my requisitions had expired. I almost cried.

I also got my new glasses. I decided to go back to single vision lenses as the progressives were not really working for me. I couldn’t see the computer through the ‘medium distance’ and I kept having to take my glasses off to read small print. This was only going to get worse as I am becoming more and more near sighted. I couldn’t find any frames that I liked and that worked on my so I repurposed my old frames that were in great shape. My main glasses are transitions – so they turn dark outside. My other pair are my driving glasses. They have a clip on piece for sunglasses and a yellow tint for driving at night. I will share the glasses over the next couple of days.

The best part was when I asked if they had run it through Blue Cross. They had not and it knocked the price down by two-thirds. I was very happy. Oh and excuse the hair. I am in desperate need of a cut!

Here is me at the lab: 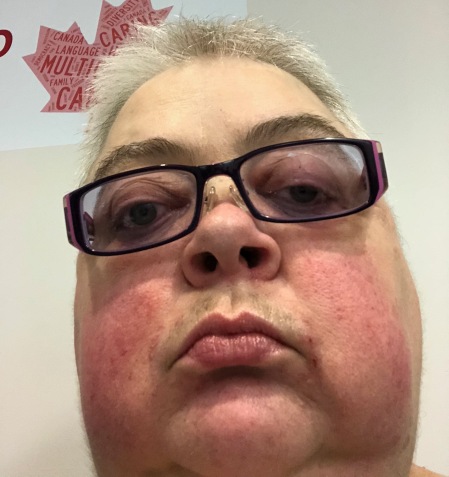 I ventured outside today. It was nice but the sun was really bright. I can’t wait to get my new glasses – which should be tomorrow as I have gone back to transition lenses. Anyway, here is me and some chickens on the egg! 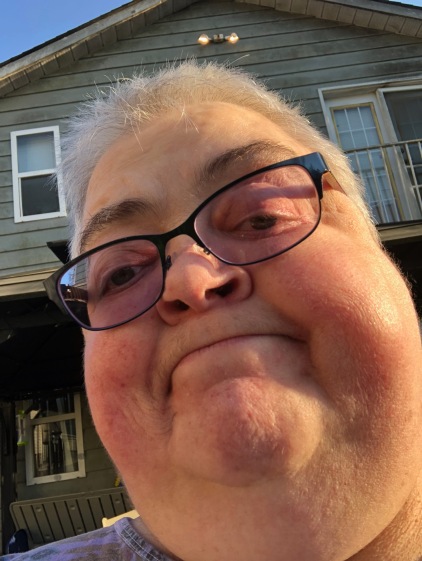